Wedding photo mystery solved... or is it? 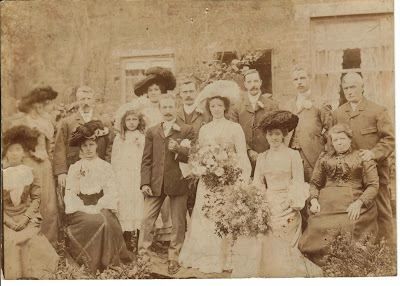 When Jayne Shrimpton responded to my plea on Twitter as to a possible date for this wonderful wedding photograph, I was delighted. At last I could finally get an answer to a question which has always remained a mystery.
Those of you who have read this blog before might recall that in a previous post about the above picture, I reported that my aunt hadn't been sure if the bride and groom were my great-grandparents John Griffiths and Sarah Eliza "Lizzie" Baugh or John's younger brother Arthur and his bride Lily Clay.
The two weddings took place almost a decade apart, in 1894 and 1903 respectively, but my limited knowledge of late 19th century and early 20th century fashions left me floundering over which of the two this could be.
Jayne offered to analyse the photograph on Family Tree magazine's Q & A page and in the August issue, the picture duly appeared having been scrutinised by Jayne's expert eye.
This was her verdict...
She conceded that late-Victorian and early-Edwardian scenes can look similar at first glance. "They often convey an ornate effect, even an air of grandeur," she says, "mainly due to the elaborate female fashions of the 1890s and early 1900s."
She continues, "We see the bride dressed in the white ensemble which was becoming fashionable throughout society by the early-1900s." 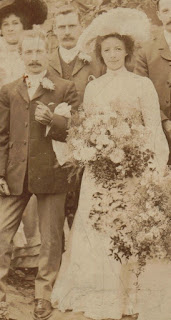 She goes on explain the subtle differences in more detail, pointing out that female fashions were more distinctive than men's and changed more rapidly. At the time of both weddings ladies wore one-piece dresses, or more usually a separate bodice and skirt, tailored to fit closely at the waist and then flaring out towards the hemline. "A soft feminine style," writes Jayne, "that expressed the prevailing art nouveau aesthetic lines of the whole era." 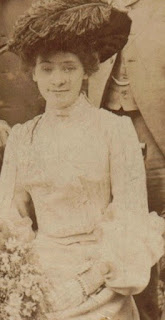 But it's the styling of the upper garments, particularly the sleeves, which help differentiate between the two dates. In the 1890s, the puffed, leg 'o mutton style of sleeve would have been in evidence but, as we can see from the bridesmaid (pictured above), they are narrow in the upper arm, widening below the elbow and flaring at the wrist where they are gathered with a tight cuff.
Hats too are a clue, as unlike during the 1890s when they would have been plate-like, sitting horizontally on the head, in the early 1900s they were worn on a slant, with upturned brims and decorated with flamboyant ostrich plumes, as they are here. 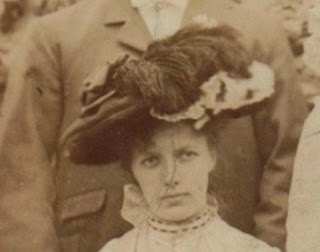 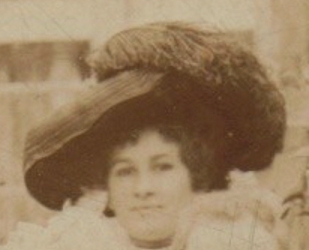 I'm extremely grateful to Jayne for her analysis and for the opportunity to learn a little of the fashion of the time.
However, there's one small fly in the ointment. As I mentioned on my previous blog, I have my doubts as to the groom being Arthur, having compared another photograph of him with that of the groom.


﻿
Looking at the two pictures side-by-side, I'm not convinced they're the same man. It may be the angle at which the photograph was taken but it seems to me that Arthur's chin is longer that that of the groom's, and that his nose is shorter.
So if it's not Arthur, then who could it be?
John and Arthur weren't the only Griffiths brothers. There was also Thomas, Boaz, Jabez and Hillary. Who's to say that this wedding wasn't one of theirs?
A quick check through the records shows that Thomas never married, and that Boaz and Jabez married in 1898 and 1910 respectively. Hillary's wedding, on the other hand, when he married Alice Jane Lowndes, took place only one year after Arthur's, in 1904.
So using Jayne's assertion that the fashion features are closely dateable to c1901-1905, it seems Hillary could be a credible alternative candidate. Now all I need to do is to find a photograph of Hillary to compare to the groom pictured here to confirm my theory!
*****************************************************
To find out more about photo dating, you'll find lots of help in Jayne Shrimpton's book, Family Photographs and how to date them.
Or why not send in your own conundrums, photograph related or otherwise, to Family Tree? You can contact them via Facebook, email or Twitter or for a quick response, visit their forum at www.family-tree.co.uk/forum to ask the experts or readers of the magazine for their advice.
﻿

Posted by Wendy Percival at 12:43 2 comments: Links to this post