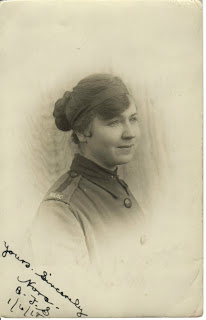 I love it when you're beavering away adding general information to your family history files and something unexpected turns up.

The 7th July 2017 was the 100 year anniversary of the formation of the Women's Army Auxiliary Corps (WAAC) and prompted me to see what I could find out about my ancestor, Nora Ida Patten, my maternal grandmother's cousin, who's wearing her WAAC uniform in a photograph I have of her.

I believe the last time I mentioned Nora on this blog, was because she'd been incorrectly labelled and attributed to the wrong parents. (See Top of my mystery list.) Since then, I've established her true identity.

She was born in late 1896 in Wednesfield, Wolverhampton, to John Patten and Mary Ann Griffiths, my great-grandfather's sister, making her my first cousin, twice removed.

Much to my delight, I discovered Nora's service records on the National Archives website and downloaded a copy. From the form I gleaned a couple useful snippets of information, unconnected with her WW1 career – firstly, that her religion was "Wesleyan" and secondly, that her occupation
was "tailoress".

But what I was excited to learn was that she'd transferred from the WAAC to the Central Flying School at Upavon, Wiltshire and joined the Women's Royal Air Force (WRAF).

The WRAF was created on 1st April 1918. Previously, the WAAC and the Women's Royal Navy Service (WRNS) both worked on air stations of the Royal Flying Corp (RFC) and the Royal Naval Air Service (RNAS). When these two merged to become the RAF, the WRAF was created to ensure specialist women's services wouldn't be lost.

Members of the WAAC and WRNS were asked if they'd like to transfer to the new service and 9,000 of them did – clearly, Nora was one.

But while it would be lovely to think that being sent to the Central Flying School meant her new status involved flying aeroplanes, in reality the role of the WRAF was to support the men by doing work they would have done, thereby releasing them for combat.

There were four broad categories in which the women were divided: Clerks and Storewomen, Household, Technical and Non-technical. To quote the Royal Airforce Museum website:


The majority of women were employed as clerks, with shorthand typists the most highly paid of all airwomen. Women allocated to the Household section worked the longest hours, doing back breaking work for the lowest pay. The Technical section covered a wide range of trades, most highly skilled, including tinsmiths, fitters and welders.
By 1920 over 50 trades were open to women including tailoring, photography, catering, pigeon keeping and driving. The work of these women ...proved that [they] could equal men in the workplace.
Notice that one particular trade mentioned was tailoring, and given her former occupation, this may have been what Nora did at Upavon. 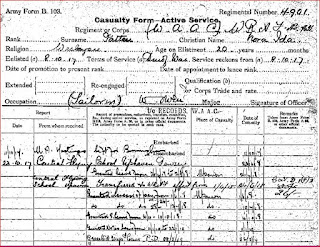 Nora was married in 1919 and her marriage was registered in Pewsey (the district for Upavon) in the March quarter of that year. I'm currently awaiting delivery of a copy of her marriage certificate.

The last entry in Nora's records is dated the end of February 1919 and it's clear that she's been granted leave. Some fellow family historians who've seen the form believe the shorthand stands for "unpaid leave". Others think it has something to do with "nuptials"! 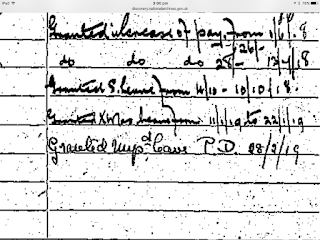 As for the P.D. at the end... given that it's the final entry and she's surely to have left the service at this point, could it be "something Discharge"?

And what of Nora's husband? His name was Albany John Ward and he was born in Devon in 1894.

You'd think with a name like Albany, he'd be easy to trace but so far information is a bit thin. Apparently he was known as John or Jack which makes his distinctive name less useful.

Hopefully my luck will change soon, as I'm keen to find out about his military career. Did he and Nora meet at Upavon? Was he a pilot? Perhaps when the marriage certificate arrives it will answer that question. I'll let you know!

If you've anything to add to the debate about what's written in that last entry of Nora's records, please do add your comment below.

In the meantime, if I learn anything definitive about that, or about Albany John Ward, you'll read it here. Watch this space...

Posted by Wendy Percival at 15:44 4 comments: Links to this post