I was intrigued a few months ago when I came across the probate record of Thomas Banner Viner,
the brother of my husband's great-grandmother, who died in 1941 aged 67. Thomas, it seemed, had left all his worldly goods to a spinster called May (surname omitted to protect the innocent!), who was 20 years his junior.

The mystery deepened when I realised his wife Alice was still very much alive, as were his two sons, Harold and Cecil, and his three daughters, Gladys, Doris and Mabel. So was this a case of cherchez la femme?


His death certificate revealed that he'd died in St Mary Abbots Hospital on 19th November 1941, of stomach cancer and "senility."


His address is recorded as 39a Paddington Street, Marylebone, the same address as the informant, who was none other than his lady friend May. The entry beside her name reads, causing the body to be buried. 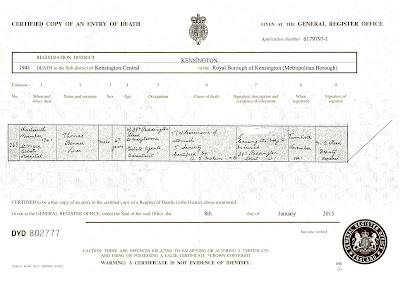 Opinions on the meaning of this phrase vary but the usual interpretation is that the deceased has no close family members to arrange the funeral. But as we know, Thomas did have family, which suggests that at the time of his death they were estranged.

I sent for a copy of Thomas's will. It was dated the year before his death and I was puzzled to read the opening paragraph which said, "This is the last Will of Mr Thomas Banner Viner, the husband of Alice Viner..."  It seems bizarre to highlight that he was married to Alice and then promptly declare everything is to go to May! Was he trying to make a point? Was it Alice who had rejected him? I can't quite decipher the actual wording but there's no question of his intentions. Dear Alice doesn't get a look-in.

Browsing through the records of his family, it appears that there was no rift at the time of his
daughter Doris's marriage to Thomas Newnham, in 1934, as the register clearly shows Thomas's signature.

Thomas had strong ties with Marylebone, where he'd apparently lived with May, as he'd been baptised in St Mary's church in 1874. He'd married Alice at St Luke's church and all his children had been born in Paddington.

In later years, however, he'd moved away from this area of London, appearing on the electoral register as living in Harrow along with Alice, as late as 1938. So whatever happened between them must have occurred in those two years between 1938 and writing his will in 1940.

Whether of any relevance or not, it's interesting to note that his elder son, Cecil, emigrated to Australia in January of 1941.

Not one to resist a good mystery, I was keen to know more, so I contacted May's family through Ancestry and asked if they knew of any link between her and Thomas Viner.

I had a friendly email from one of her descendants in New Zealand who promised to ask his 90 year old cousin, the only member of the family still living who he thought might remember May well.

And remember her she did, recalling that May was a kind and generous lady who never forgot Christmas and birthdays. My contact's own vague recollections were also confirmed - that May was a large lady who wore fox furs over her shoulders, the sort with a snap-clasp in the fox's mouth which closed over the tail (see photo left of something similar)!

As for her relationship with Thomas Viner, the old lady said that May had "man-friends with whom she lived at different times" and this was frowned upon by certain members of in the family, some even refusing to allow her in the house!

It was known that May had received an inheritance from one of her men-friends and was thought to have been the "other woman" in the case. She used the money to buy herself a house in Wembley where she lived with another gentleman, her final "man-friend" called Basil. He wasn't liked by the family and it seems they might have had a point, as after May died he cleared out the house and promptly disappeared. Perhaps he already knew that May had not remembered him in her will but had left her estate to her brother.

As for why Thomas turned to May for his home comforts, I guess we'll never know, but it's an intriguing story nonetheless and it's been brilliant being able to find out as much as I have.

And it's certainly inspired my mystery writer's brain - I wouldn't be at all surprised if something of a similar nature finds its way into the plot of Esme's next story (wink, wink)!


Posted by Wendy Percival at 16:14 No comments: Links to this post